← back to
First Word Records
Get fresh music recommendations delivered to your inbox every Friday.
We've updated our Terms of Use. You can review the changes here.

Flying / Where Do I Begin? 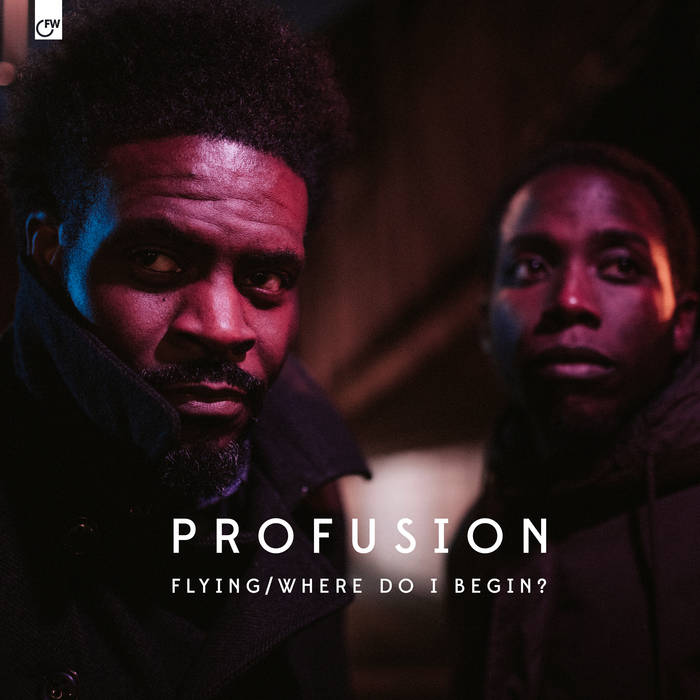 Profusion (noun): an abundance of something rich.
What a deftly fitting description for the collaborative project between K15 and Emeson.

This talented duo hooked up back in the days of MySpace. A future of combining their skills was always inevitable, and in 2017, it's finally time to unleash their united sonics out into the ether.

The solo-projects of Tottenham-raised Kieron Ifill (aka K15) date back a decade, but were truly kick-started on labels such as Kyle Hall's Wild Oats and also on WotNot Music, with an abundance of genre-crossing releases dropping ever since, taking in sounds from jazz, soul, hip hop, house, techno and broken beat. Additionally to his production work (also releasing under the moniker Culross Close), he has established himself internationally as a DJ, with prior residencies at the world famous Jazz Café, and his WU15 project (along with Yussef Kamaal's Henry Wu) on Alex Nut's Eglo Records, cementing his rightful status as part of London's now-school.

Partner in Profusion, Emeson, has many skills to his bow - singing, songwriting, producing, promoting, DJing (under the alias Ed Nice) and acting, appearing across the Marvel Cinematic Universe and in Rogue One: A Star Wars Story, to name but a few. As a musician, his varied skill-set has seen him work with Chico Hamilton, Carla Duke, Karmasound, Uzo Madu and Chris Jerome. A frontman for soul-jazz groups LifeSize, The One and Saturn's Children, he has featured on releases for BBE and Tokyo Dawn, and appeared live on stage at the likes of Ronnie Scott's. A truly formidable talent.

We set it off with this double-header of heat; ‘Flying’ and ‘Where Do I Begin’. Sun-soaked synths drift across the warmest of basslines and neck-snapping beats. Emeson’s rich vocals gracefully ride atop of K15’s delectably bruk twist on neo-soul sonics, this is seriously classy contemporary London soul music. As highly suited for laidback cruising as they are for heads-down sweaty dancefloors, as proven triumphantly when debuted at the closer of the recent Co-Op ‘Selectors Assemble’ dance. Both tracks are killer and we hope give you a good flavour of what’s to come.

Profusion - an abundance of something rich indeed. A project that embodies an array of everything that is great about British black music. Be ready.

Profusion is the collective efforts of Emeson and K15.

Bandcamp Daily  your guide to the world of Bandcamp

Alex Rita and Errol from Touching Bass feature in our special London edition of the Bandcamp Weekly.